Check out the video and see the photos of Monterey Auto Week, where the HVA presented three FIVA Preservation Trophies and five This Car Matters Awards.

While most of the amazing vehicles lining the show fields tend to be immaculately restored, this year saw a significant number of un-restored cars at the 2012 Pebble Beach Concours d’Elegance.

During the event, the Historic Vehicle Association caught up with historic car consultant, Malcolm Welford, who spoke in the video below about how this growing class of “preserved automobiles” helps to tell the history of motoring. Like a fine work of art, these incredible and eye-catching vehicles are touched by the patina of history, thanks to the loving care of those who have owned them.

The HVA also visited with Malcolm Welford during The Quail: A Motorsports Gathering. In the video below he celebrates The Quail’s 10th anniversary and the almost endless list of vehicles on display. 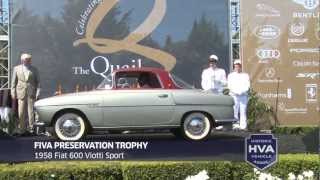 To better recognize these rolling time capsules, the HVA, along with Fédération Internationale des Véhicules Anciens (FIVA), was on hand to present trophies for the Most Well-Preserved vehicles during the week’s events, including two at the Pebble Beach Concours d’Elegance and one at The Quail Motorsports Gathering.

At these and other events throughout the week, the HVA filmed interviews with car owners for its This Car Matters series. These special features will be released over the coming months as part of our monthly eNews.

The HVA arranged for Bruce Meyers’ original Manx—affectionately known as “Old Red”—to be on exhibit at the Museum of Monterey. At McCall’s Motorworks Revival, the HVA had on display a 1903 Knox owned by the Henningsen Brothers of Salinas, California. This car is believed to have been the first gas-powered vehicle in Santa Cruz.

Along with the FIVA Preservation Trophies awarded, the HVA presented This Car Matters Awards to vehicles of historic significance at the Concours on the Avenue and at The Quail.

Winners at The Quail:

Winners at the Concours on the Avenue:

The HVA identified cars of historic significance around Monterey. We’re collecting stories from around the country, so head on over to the This Car Matters page and share your story.

Video Recap: The HVA in Monterey in 2010

The HVA in Monterey: A Recap of the Monterey Auto Week

HVA Matters: The Year Ahead

Making the Register: The Manx In-Depth

In Photos: Cars At the Capital

Cars At The Capital