This 1969 Chevrolet Corvette Stingray Coupe is nationally significant based on four criteria. First, it is associated with important events in the history of the United States –­ the monumental efforts of the men and women that spearheaded America’s lunar explorations in the 1960s. Second, it was owned and special ordered by the fourth human to set foot on the moon as part of a unique program by General Motors for astronauts and is therefore associated with the lives of a significant person in American history. Thirdly, its unique paint design was conceptualized by artist and designer Alex S. Tremulis. Finally, as it is the only one of a series of three matching Astronaut ordered Corvettes built in 1968, it is also significant for its information value.

In 1961, mired in the Cold War with the Soviet Union, President John F. Kennedy announced to the world that the U.S. was committed to sending a man to the moon before 1970 to beat the U.S.S.R. In a hotly contested “space race” that followed, a handful of young American astronauts became the quintessential celebrities and the poster boys of the decade. Recognizing the power in the space traveler’s fame, in 1961, General Motors working with Jim Rathmann Chevrolet, began a program for the astronauts – lease a Chevrolet of any type (including Corvettes) for $1/year. The result? The majority of the men that have landed on the moon were Corvette owners during their time as astronauts!

The lease program had its roots with the first American astronaut to reach space – Alan Shepard. Shepard was a sports car racer and Corvette owner before becoming one of the nation’s first astronauts as part of the famed “Mercury Seven” team. After his historic space flight in 1961, GM executives, presented Shepard with a brand new custom 1962 Corvette. From this, former Indy 500 winner Jim Rathmann, who owned a Chevrolet dealership near the space station in Florida, worked with GM to launch the lease program to get the rest of astronauts in Chevrolets, especially Corvettes. All but one of the first seven astronauts ended up with the high-performance Chevy sports car.

Throughout the 1960s the U.S. and the Soviet Union traded space travel, “wins” and NASA and its astronauts captivated the nation. The second group of astronauts (Gemini) leased many more Chevrolets and Corvettes from Rathman during the formative years of the space program and legend has it that the rocket jockey’s penchant for speed didn’t stop with their space craft as they were notorious for their antics driving Corvettes.

By 1969 the third group of Astronauts were making history – the Apollo program had reached its zenith. On July 20, 1969, Apollo 11 landed on the moon and two of its three astronauts became the first humans to step foot on the moon. The space race had been won, and the American public was elated– but NASA wasn’t done. The Apollo 11 landing opened the door for future research and a number of missions followed to further explore space and the moon.

Apollo 12 landed on the moon November 1969. The three astronauts that completed this historic follow-up mission were Alan Bean (Lunar Module Pilot), Pete Conrad (Mission Commander), and Dick Gordon (Command Module Pilot). In 1968 this trio leased a matching trio of specially designed 1969 Corvette Coupes from Rathmann. Each car was Riverside Gold with custom black “wings” on the aft section designed by the astronauts in conjunction with artist and designer Alex Tremulis. On the front left fender of each car was a red, white and blue plaque – each astronaut had a color code for their flights and the corresponding color block on each Corvette held an initial for their position: LMP, CDR and CMP. All three of the cars were ordered with big block engines and manual transmissions. These three cars became among the most famous of the “astronaut” Corvettes when the trio was featured sitting atop their cars in Life Magazine shortly before the Apollo flight in the Fall of 1969.

50 years later, Bean’s Corvette is the only one of the three 1969 matching Corvettes that is known to exist. Current owner, Danny Reed purchased Bean’s legendary Corvette on a closed bid from General Motors Acceptance Corporation in 1971. Reed has diligently maintained and preserved the car and its history throughout the years, regularly exhibiting it around the country. The same year Reed purchased Bean’s Corvette, the astronauts of Apollo 15, not to be outdone by Apollo 12, ordered three more matching cars. In 2018 and 2019 Reed tracked two of the three down and now has a small collection of some of the most significant Corvettes ever built. 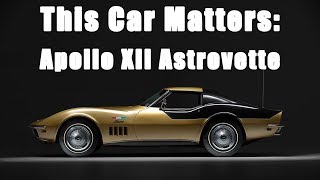