The 1907 Thomas Flyer is significant based on all four of the Criteria for Historic Significance. It is associated with important events and important persons in the history of the United States. The Flyer was piloted across the world in the first transcontinental automobile race in 1908 where it took first place when it arrived in Paris months after departing New York City. Its construction value is significant as an exemplary automobile from the first decade of the 20th Century that proved itself in the most grueling possible competition. The Thomas Flyer’s informational value is significant as the most important surviving artifact from the 1908 Paris to New York race and was masterfully restored in the 1950s by noted collector William Harrah with help from the cars original pilot, George Schuster. 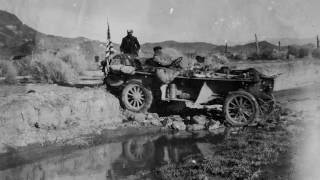 This Car Matters: Thomas Flyer, winner of the New York to Paris Race

A Tribute to Bruce Meyers – Father of the Fiberglass Dune Buggy

The Legend of the Lost Cord L-29 Speedster