Driving Down Memory Lane in the Original Minivan

This article originally appeared in the New York Times, written by Nick Kurczewski, on December 15, 2016

ALLENTOWN, Pa. — Minivans are the automotive equivalent of the comedian Rodney Dangerfield’s routine about not getting any respect. They’re uncool at any speed.

But the upright shape and boxy proportions of minivans make it easy to transport plenty of people and lots of luggage. In fact, they tend to perform the job better than most other types of passenger cars — even their upscale descendant, the sport utility vehicle.

No wonder Chrysler scored such a monumental sales hit when it introduced the first minivans to the United States market in 1983, for the 1984 model year: the Dodge Caravan and its corporate cousin, the Plymouth Voyager.

Sure, the minivan would eventually acquire the stigma of suburban stolidity and soccer mom conventionality — another reason the sleeker, sportier S.U.V. was able to emerge as the more chic 21st-century family hauler.

There had been vans before then, of course, including the Volkswagen microbus, the Ford Econoline and the Chevy Van. But the minivan was smaller and — as a separate Times article that year described it — was “a front wheel-drive combination of a station wagon and conventional van,” a vehicle that fits “easily into the majority of car garages.” 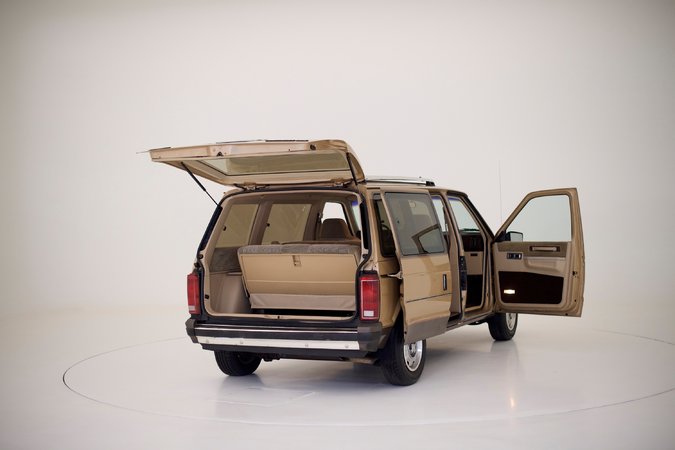 All of which was context for my recent opportunity to take a drive down memory lane by putting a mint-condition 1984 Dodge Caravan through its spongy-ride paces.

Despite being more than three decades old and having been owned by the same family for 28 of its years, the Caravan I drove had only 89,000 miles on it. And it still had its original engine, paint job, immaculate brown and tan cloth interior with fake wood trim, and even the Dynamic Noise Reduction AM/FM cassette stereo that it carried when it rolled down a factory assembly line in Windsor, Ontario.

The only thing that might have made it scream 1984 any louder would have been a “Where’s the Beef?” bumper sticker.

The vehicle is such an artifact of its time, in fact, that it is owned by the Historic Vehicle Association, in Allentown, Pa., where it is garaged in august company. The association’s National Historic Vehicle Register features automotive glitterati like a 1947 Tucker, the first-ever 1967 Chevrolet Camaro and a 1964 Shelby Cobra Daytona Coupe racecar — a multimillion-dollar classic now considered one of the most valuable American-built cars of all time.

Its homely pedigree notwithstanding, the Chrysler minivan helped transform the American automotive landscape, according to Mark Gessler, president of the Historic Vehicle Association, who was good enough to let me take the vehicle for a spin.

Brandt Rosenbusch, an archives manager for more than 300 historic vehicles owned by Fiat Chrysler Automobiles, is not shy about extolling the first minivan’s significance: “It did change everything. There was nothing like this when it came out in 1983. It was radical for its time, really.”

Chrysler at the time was no stranger to small vans, having produced the compact Dodge A100 van from 1964 to 1970. But the A100 was very much a work truck at heart, and far from the suburban-tuned conveyance that the true minivans would someday become.

“Chrysler had been working on a minivan since around 1972,” Mr. Rosenbusch said. But in the early going, the concept had much in common with the rear-wheel-drive A100 and never made it beyond design sketches and clay models. 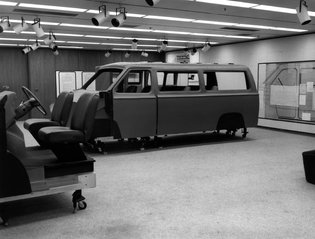 It would take a pair of high-profile executive defections to bring the minivan to life in Auburn Hills, Mich.

When Hal Sperlich and Lee Iacocca moved to Chrysler from Ford Motor in the late 1970s, they took with them a concept for a small van that had been under consideration at their former employer.

At Ford, the idea had fizzled. But at Chrysler, where Mr. Sperlich and Mr. Iacocca had greater leverage and access to a range of small, front-wheel-drive vehicle platforms — first introduced on the 1978 Dodge Omni and Plymouth Horizon — the plans accelerated. The coming minivans would also use a stretched version of Chrysler’s K-car platform, itself a variation of the unibody construction found in the Omni and Horizon.

Chrysler still owns the very first minivan that rolled down the assembly line in 1983, with Mr. Iacocca, by then the chief executive, behind the wheel. Mr. Rosenbusch said that it remained one of the most beloved models in Chrysler’s historical collection.

“It’s a really popular vehicle,’’ he said. “Whenever we take a minivan to a show, it’s just amazing the amount of stories there are. Everybody remembers their family had one. Everybody relates to the minivan.”

It’s clear the minivan revolution didn’t include tire-smoking acceleration, as I learned when I pressed the loaner’s gas pedal to the floor. The 4-cylinder engine delivers approximately 100 horsepower. That, combined with the column-shift automatic transmission, results in forward momentum best described as relaxed.

But twirling the brown plastic steering wheel, I found the Caravan surprisingly nimble for its age, even if repeated hard cornering might produce motion sickness. The ride is springy and comfortable, like an old sofa.

Outward visibility is excellent, thanks to the large flat windows and high seating position. Cup holder technology, on the other hand, was still in its infancy in 1984, judging from the pair of extremely shallow indentations located precariously atop the center console.

Settling into a comfy cruise, I tried out that Dynamic Noise Reduction radio, letting it scan until it caught an FM signal. Fittingly, through those Reagan-era speakers came Twisted Sister’s rock anthem “We’re Not Gonna Take It.’’ The song is from an album that came out — when else? — in 1984.