Round out the year with this look back at three extreme automotive spectacles that prove at least some segment of the car culture was certifiably nuts.

Looking at this picture, you’re probably saying to yourself: Where on Tatooine did Princess Leia ever find a crazy hot rod like this? Sorry, but this is not some deleted Star Wars scene.

What you are looking at is, in fact, a snapshot of the very real and once insanely common automotive sideshow act known as the “lion drome.” The spectacle can be traced back to New York’s Coney Island and the Wall of Death attraction that originally started out with motorcycle-riding madmen racing around inside the equivalent of an oversized wooden barrel. Boring, right? Apparently, that’s what audiences back then thought, too.

But thankfully, whenever you couple the short attention span inherent in a human audience with a performer whose grey matter has clearly been scrambled by daily doses of centrifugal force, bizarre things can occur. In this case, someone decided that the stunt would provide even more raucous entertainment if you did it in an automobile with a lion riding shotgun.

Touring stunt people with stage names like Tornado Smith, Fearless Egbert and the Gymkhana Girls kept lion dromes alive until namby-pamby rules about spectator safety and animal rights ruined all the fun. In truth, the last lion drome in New York closed in 1964, supposedly after a drunken carnival worker stuck his hand into the cage of a co-pilot lion named King. The police were called and King was shot. Now, the closest you can get to seeing the live act is Las Vegas or traveling circuses in Europe, where sequined humans on souped-up Vespas whip around inside a big metal sphere… sans lion. Yawn. 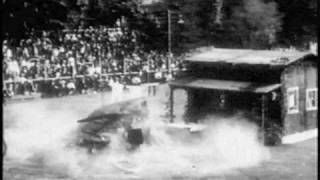 Round out the year with this look back at three extreme automotive spectacles that prove at least some segment of the car culture was certifiably nuts. Lion Dromes Looking at this picture, you’re probably saying to yourself: Where on Tatooine did Princess Leia ever find a crazy hot rod like this? So

With any study of comedic films from the 1920s and `30s, it’s immediately apparent that one of the easiest ways to get a Prohibition-era audience belly laughing to the point of shooting root beer from the nose was to senselessly crash an automobile to bits.

Stunts involving vehicles have been popular cinematic fodder since the days of the Keystone Cops. In the 1980s, many popular television shows (among them, The A Team, The Fall Guy and The Dukes of Hazzard) were built entirely around car chases and impossible stunts. But unlike modern times, where cars are sent hurtling over jumps and spiraling through the air only to land with a few sparks, in the good old days the joke simply wasn’t funny if the wheels didn’t fly off or the driver didn’t spill from the wreckage with some sort of zany spinal injury or staggering blunt-force trauma.

From 1911 to the late 1920s, the American sport of auto polo looked like it might actually catch on. And why the heck not? Here was a new automotive sport that had everything — high speeds, violent crashes and, as the writer Robert Brockway noted, a great (albeit twisted) degree of hilarity.

“You would head out to your nearest muddy field,” wrote Brockway, “mount up an unstable, dangerous, rickety car — a vehicle that had only been invented 30 years earlier, remember — and then whale the bastard about psychotically while swinging a friggin’ hammer over your head… the only mandated gear was a jaunty cap and a callous disregard for human life.”

The official inventor of auto polo was Ralph “Pappy” Hankinson, a Ford automobile dealer from Topeka, Kansas, who supposedly devised the sport as a publicity stunt in 1911 to sell Model T cars. Auto polo matches appeared at county fair exhibitions and stadium events all across the Midwest, every weeknight in New York City and Chicago, and as far away as Europe.

Historians say the sport eventually waned in popularity not because it was just dumb, but instead due to the high cost of replacing vehicles. Aside from a brief post-war resurgence in the Midwest, auto polo events ceased after World War II.